Horseshoe Draw is an ephemeral stream channel in the Upper San Pedro River Basin that drains approximately 10,700 acres. The recharge project receives accelerated runoff that originates in the San Jose Mountains in Mexico. Before the project was constructed, a large head-cut had been steadily eroding Horseshoe Draw upstream of its confluence with the San Pedro River. An 8-acre detention basin now collects and slows the runoff, enhances infiltration to the aquifer, and improves downstream water quality.

The project has multiple goals: to prevent further erosion of a healthy sacaton grassland, control excessive sediment and E. coli from being flushed into the San Pedro River, as well as enhancing groundwater supplies by recharging stormwater underground into the aquifer. Monitoring results from 2019 show that the project detention basin doubled the amount of time that stormwater flows to the channel downstream of the basin, allowing additional time for infiltration and doubling the amount of recharge.

Before the project was constructed, a large head-cut had been steadily eroding Horseshoe Draw upstream of its confluence with the San Pedro River. This video was capture with drone survey technology that allows us to compare changes in geomorphology, or the shape of the draw, before and after construction: 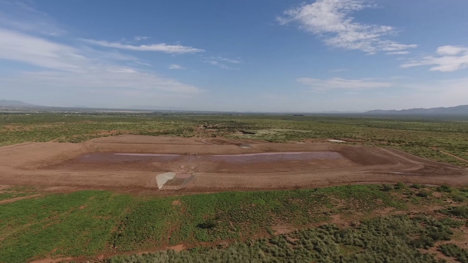 A large detention basin was constructed on Horseshoe Draw, upstream of the area where excessive amounts of sediment were eroding down the draw, causing problems for downstream roads and the San Pedro River. (photo credit Pat Call) 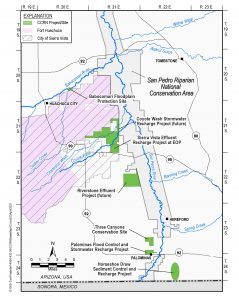