The mission of the CCRN is to implement a regional network of land and water management projects that result in a healthy watershed, flowing San Pedro River, conservation of water resources, and a vibrant local economy. CCRN was originally formed in 2015 by the City of Sierra Vista, Cochise County, Hereford Natural Resource Conservation District, and The Nature Conservancy. The City of Bisbee joined in 2016, and Fort Huachuca joined in 2021.

The CCRN Road Map, the plan for implementing the CCRN, has specific goals for developing and maintaining projects. The Road Map covers a 5-year period and is reviewed annually to create project-specific work plans for the coming year. The initial CCRN Road Map covered 2015-2020; however, the main goals were largely accomplished by 2019, so a new 5-Year Road Map for 2020-2024 has been adopted.

As of 2020, the Cochise Conservation and Recharge Network consists of eight sites and/or projects on 6,344 acres along 25 miles of the Upper San Pedro River, as shown on the Site Location Map. Each site has been selected for its potential to recharge and/or conserve water to benefit the river. Additional sites that are capable of enhancing the mission of the CCRN may also complement this network and be promoted by the CCRN in the future.

CCRN tracks the water benefits by year at each site. The benefits are a combination of reported recharge and calculated water savings. Water savings are calculated as how much pumping in the future is prevented or precluded and, where applicable, the retirement of historical pumping. Future pumping is prevented through permanent conservation easements placed on land that legally restrict use of groundwater. Several sites where pumping has been retired and/or precluded also serve as current or future recharge projects. The CCRN methodology for calculating the quantity of precluded pumping is generally consistent with the 2014 Biological Opinion for Fort Huachuca (Fort Huachuca, 2014). This calculation is based on the zoning density of the parcel with an average of 2.5 people per household, at a per capita usage of 118 gallons.

The benefits of the current CCRN projects are shown on the figure to the right. Other projects are being pursued by individual members that are not reflected on this graph. CCRN projects provided more than 6,000 AF of water benefits to the San Pedro River in 2020, and more than 40,000 AF since the formation of the CCRN in 2015. Two of the projects, the Sierra Vista Effluent Recharge project at EOP and Three Canyons Conservation Site, are responsible for nearly 80% of the calculated water benefits accrued by the network.

The CCRN Hydrologic Monitoring Program also measures and tracks data on groundwater level changes and water flowing to the sites, both at future project sites and at operational project sites. 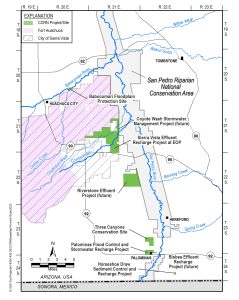 The CCRN was formed in 2015. The members are Cochise County, the City of Sierra Vista, The Nature Conservancy, Hereford Natural Resources Conservation District, the City of Bisbee, and Fort Huachuca. 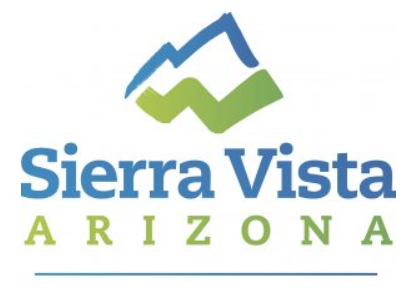